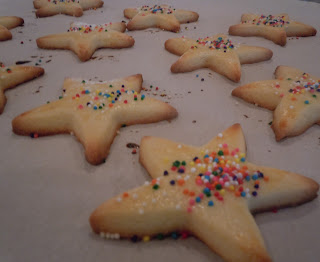 In Italy, the holiday and gift giving season doesn't end with the New Year but with the Epiphany on Jan 6th. On the night of the 5th, Italian kids set out stocks by the fireplace and wait for an old woman named La Befana, a female Santa Claus-like character, to come and fill them with presents or sweets (if the child was good) or charcoal (if the child was bad). In the legend she has white hair and wears old clothes and she flies on an old broom to deliver presents to kids.

Nowadays, Babo Natale (Italian Santa Claus) also delivers presents to Italian kids on Christmas Eve but this is a new tradition that has been adopted from other cultures. In fact, my mom only recalls presents being brought on Epiphany, when they would hang up their calze (stockings) for the Befana to fill during the night.
In this issue I wanted to share with you a recipe for befanini, a cookie that symbolizes the legend of La Befana.  I also wanted to share with you what I know about this legend.
I recall an Italian children song that my mom used to sing to us and it describes the old lady as:
"La Befana vien di note
Con le scarpe tutte rotte
Col vestito alla romana
Viva, Viva La Befana!"

The English translation is:

The Befana comes by night
With her shoes all torn
She comes dressed in Roman style
Long live the Befana!

According to the legend of la Befana, the Three Kings stopped at her house on their way to Bethlehem to visit the newborn Christ child and invite her to join them. She refused because she was too busy with her housework. Not long after, a shepherd asked her to join him in paying respect to the Christ Child. Again she refused, and when night fell she saw a great light in the skies.
La Befana thought perhaps she should have gone with the Three Kings, so she gathered some toys and roll them up in a cloth which she tied to the end of her broom, and then she ran to find the kings and the shepherd. But la Befana never found them or the stable. Now, each year she looks for the Christ Child. Since she cannot find him, she leaves gifts for the good children of Italy and leaves pieces of coal (nowadays carbone dolce, a rock candy that looks like coal) for the bad ones.

To make the cookies: In a medium bowl, whisk the flour, baking powder, and salt together and set aside.
In the bowl of an electric mixer fitted with the paddle attachment, cream the butter and sugar together on medium speed until creamy and light, about 2 minutes. 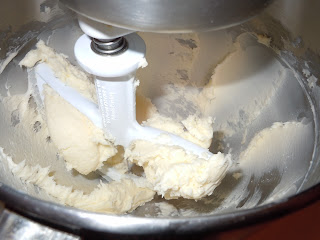 Beat in the yolks, one at a time, scraping down the sides of the bowl after each addition, followed by the vanilla extract, rum and zest. Add the dry ingredients on low speed to form a stiff dough. 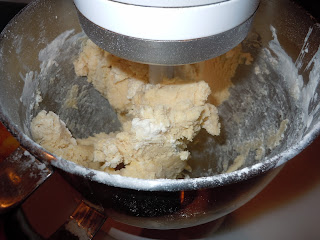 Remove the dough from the bowl, wrap it in plastic and chill until it is firm enough to roll.
Preheat the oven to 350 degrees. Line two baking sheets with with parchment paper. 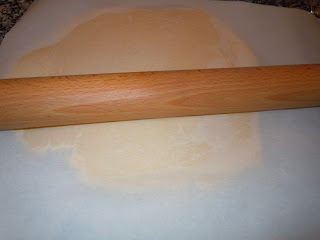 Roll the dough 1/8 of an inch thick. I like to roll it between to pieces of parchment paper. Using a floured, star shaped cookie cutter, cut the dough into star shapes (or any other holiday shape). Place the cookies ½ an inch apart on the baking sheets. Gather the scraps together and repeat rolling and cutting until you have used all the scraps.
To make the glaze: Lightly whisk the egg yolk with the milk. Using a small pastry brush, lightly brush the surface of the cookies with a bit of glaze and decorate them with the sprinkles. 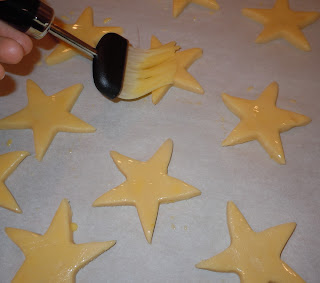 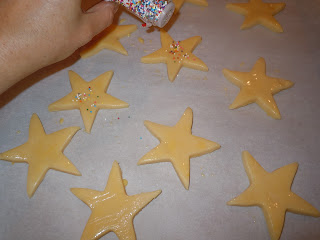 Bake the cookies until they are lightly golden brown, 12 to 14 minutes. Allow the cookies to cool slightly on the baking sheets, then gently remove them with a spatula to a wire rack to cool completely. Repeat the process with the remaining dough until all the cookies are baked.
The cookies may be stored in an airtight container, layered between sheets of parchment paper, for up to 4 days. 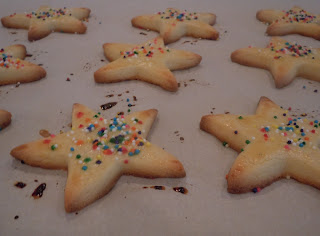 Posted by Unknown at 5:19 AM No comments: