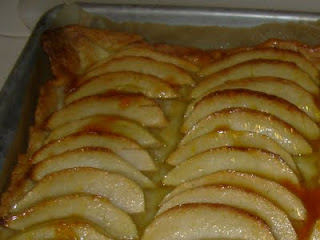 This is a great tart to serve for Thanksgiving or for any dinner party!
To make the pastry, put the flour, sugar, salt, baking powder and butter into a bowl. Rub the butter into the flour mixture with your fingers until it is mealy and resembles fine breadcrumbs, with some larger flecks of butter still visible. Pour the beaten egg and 100 ml of iced water into the bowl. Quickly knead the dough until it comes together, the dough will be soft, a bit sticky and a little rough looking. Wrap the dough and allow it to rest in the fridge for at least 1 hour (better overnight).


Roll out the dough into a rough rectangle about 11″ by 16″ and transfer it to a baking sheet. Cover the pastry with plastic wrap and allow it to rest in the fridge for 30mins.

Peel the apples and slice themy thin (1/8 inch thick). Spread the apricot preserve in a thin layer on the top of the pastry dough. Arrange the slices in 4 or 5 rows over the pastry like cards in solitaire. Allow it to rest in the fridge until you are ready to bake.

Preheat the oven to 375F. Sprinkle the extra sugar over the apples and then bake the tart for about 45mins or until the pastry is crisp and the apples are soft and golden.Serve immediately in large squares with whipped cream or vanilla ice cream. 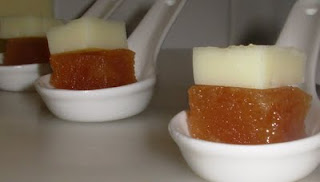 If you haven't tasted quince yet, you are missing out on one of the most luscious and fragrant fruits! Hard as a rock and inedible in its raw form, quince transforms to a mellow sweetness when slowly cooked with sugar. In the same way its paled yellow flesh turns to an attractive bright reddish color during the slow cooking process. Because of its high pectin content, it is wonderful for making jellies, preserves or fruit paste.

Native to the Caucasus region, between the Caspian Sea and the Black Sea, the quince has been cultivated for thousands of years. Many historians believe that the “Forbidden Fruit of the Garden of Eden” mentioned in the Bible wasn’t really an apple, but a quince. It was highly valued by ancient Romans and Greeks. The fruit was given to brides on their wedding day as the symbol of love, happiness and fertility. It was also valued by Medievals and highly used as a condiment to enhance the flavor of meats, poultry, and other savory dishes. A quince paste cut into small pieces and rolled with sugar was served as a an elegant dessert treat in many court banquets.

Nowadays, quince is commonly grown in central and southern Europe, where the summers are sufficiently hot for the fruit to fully ripen. They are also widely grown in Argentina, Chile and Uruguay. Although quince is not very popular in North America, it is grown mostly in California and New York, and it is gaining popularity among pastry chefs.

Quinces can usually be found between October and January. The fruit resembles a cross between a Golden Delicious apple and a pear. Choose fruit firm and yellow, with a fragrant smell. The best way to store quince is in a tightly sealed bag in the refrigerator, where it can last up to two months.

In Italy, one of the most common ways to prepare quince is “Cotognata" - which is similar to the better-known Spanish “ Dulce de Membrillo”. In Spain it's commonly served with Manchego cheese, which you can substitute with any other cheese with a flavor strong enough to stand up to the sweetness of the sweet quince. 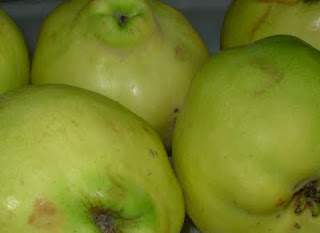 Wash the fruits and place it in a baking pan covered with aluminum foil. 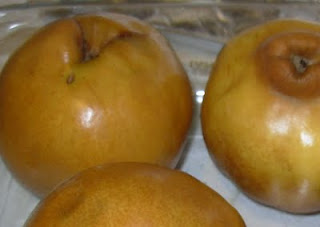 Core ant take out the seeds from quinces, then cut them in 1/3 inch cubes and process the fruits with a blender until very smooth (I like to leave some small pieces of the fruit). Place the mixture in a large pot and add the sugar, the lemon juice and the lemon zest. 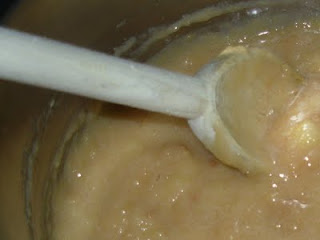 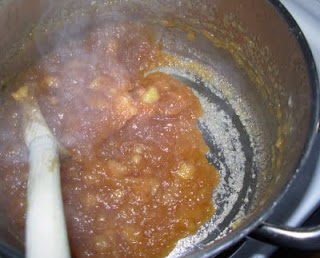 Simmer over low medium heat, stirring constantly, until the quince puree thickens and has a deep red color. This could take about 30- 40 minutes.
Let it cool in a shallow pan. 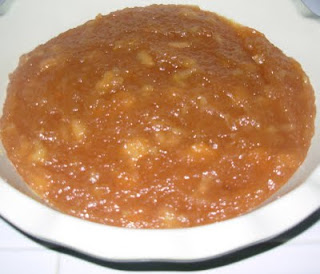 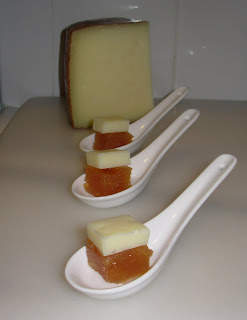 Serve cotognata with cheese (especially manchego, gorgonzola or goat cheese). It also makes a great filling for sweet tarts.
Posted by Unknown at 6:46 AM No comments: