Figs in sweet and savory dishes 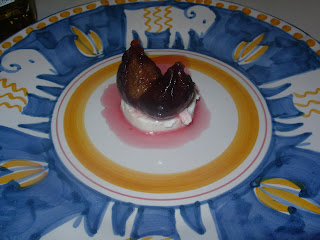 Every time the fig season arrives, I recall one of the most memorable dishes I had when I was working at the Rose Pistola in North Beach: prosciutto-wrapped figs with gorgonzola. The sharpness of the cheese with the saltiness of the prosciutto paired wonderfully with the sweet figs. Although I had tried perfectly ripened figs before, especially in Italy from the trees of my grandma’s house, I wasn't really fond of the fruit. But now, after trying this dish, I look forward to the fig season to experiment with them in my kitchen. They are so versatile that you can include them in sweet and savory dishes. When they are ripe, they have a rich honey flavor and pair wonderfully with cheese or salty ingredients, like salmon, bacon, or prosciutto. I especially like the combination of figs with blue cheese like Gorgonzola or Roquefort. I also find that caramelized figs pair lovely with mild cheese like mascarpone or goat cheese.

There are two fig seasons; one in June and another one starting in late summer and ending in early fall. I personally find that the best figs come at the end of August and the beginning of September. They must be picked ripe from the trees as they do not ripen well once picked. When figs are ripe they are soft to the touch but not mushy and have a thin, unblemished skin. When selecting them, avoid very firm fruit as will not properly ripen further and will lack flavor. Since the fruit is delicate and extremely perishable you should store it in the refrigerator and consume within a day or two.

There are hundreds of fig varieties in United State, but the most commonly grown commercial ones are the Black Mission, the Calimyrna (Smyrna grown in California) and the Brown Turkish. Each is remarkably different in both appearance and flavor.

The Black Mission figs, named for the missionary fathers who planted the fruit as they traveled north along the California coast in 1759, are the most popular and commonly found in the peak of the summer growing season. They are deep violet to black in color, with a juicy pulp and a rich and intense honey-sweet flavor. You can eat them fresh or in your favorite recipe. This is my favorite fig for cooking as its sweet flavor is intensified when the fruit is caramelized.

The Calimyrna is the California version of the Smyrna fig that originated in Turkey, which was imported by a San Joaquin Valley grower in 1882. It is golden in color and has a nutty sweet flavor. They are great fresh or cooked in marmalades or chutneys.

The Brown Turkey is a large Turkish fig with a rosy interior. It is juicier than the average fig, which makes them great for baking because they hold their shape nicely and the sugars in the juice caramelize as they cook. I like to add them in my baking goods: breads, focaccia, cakes.

From appetizers to deserts, figs can be used in a variety of dishes. I like to caramelize them with honey or sugar and serve them in salads, as stuffing for poultry or pork or as a dessert accompanied with ice cream, or for a richer flavor with goat cheese or gorgonzola. The imagination is the limit with figs!

In this issue I want to share with you one of my favorite recent experiments with figs:

The sugar in this recipe preserves nicely the fruit and you will be able to enjoy the rich flavor of figs until winter time.

Place the figs in a single layer in a saucepan. Add the lemon zest, the lemon juice, the pepper corn, salt and the cinnamon stick. 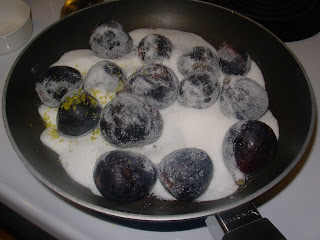 Cover them with the sugar and cook them over a low heat for about 45 minutes, turning them carefully every 10 minutes. 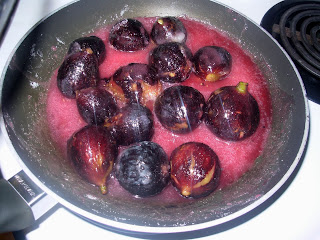 The sugar will turn into a nice violet syrup caramelizing the figs. Turn the heat off and add the Brandy. 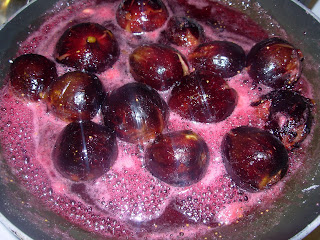 Let the fig cool completely before placing them in a clean container with the syrup covered with a lid or with plastic wrap. Refrigerate them overnight or up to a month. I like to serve them at least a week after preparing them as the flavor intensifies with time. 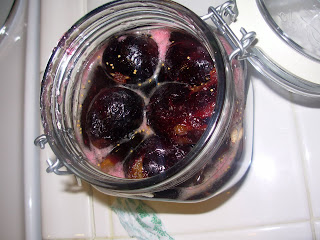 Serve it with goat cheese or gorgonzola for a rich dessert. 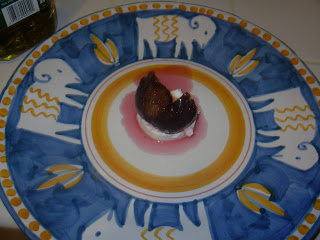 Posted by Unknown at 2:17 PM No comments: